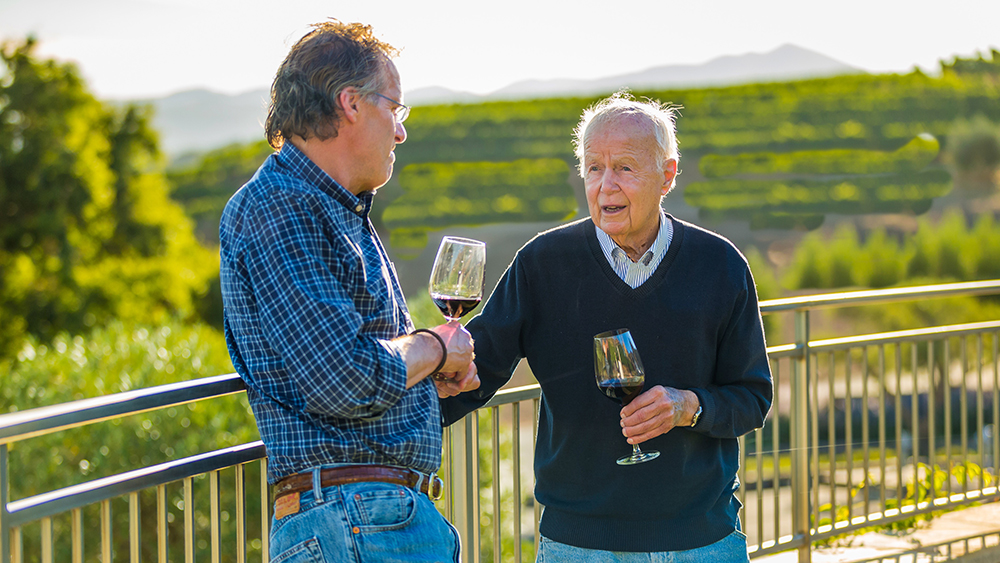 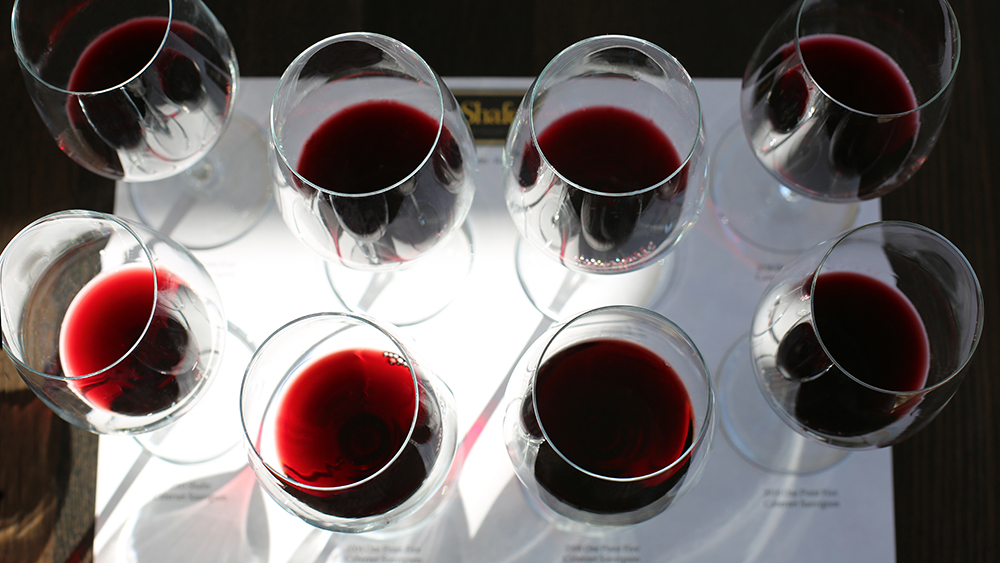 When you buy a “1.5” from Shafer Vineyards, it’s not a magnum you’re getting. It’s a generation-and-a-half of the Shafers themselves—Doug and his late father, John, who founded the winery in the 1970s. And while avid collectors might (understandably) know the team best for their acclaimed Hillside Select, the Shafer One Point Five, in its 15th vintage this year with the release of the beautiful 2018, represents the real core of the iconic Stags Leap District brand’s production.

Over a fascinating retrospective tasting recently, Doug Shafer spun the origin story of the slightly confusing name (spoiler alert: it involves more than a few golf balls). And as he, along with longtime winemaker Elias Fernandez, recalled the twists and turns of those 15 years—the budget-busting complications of planting a new vineyard; the dialing in on farming, as Napa Valley collectively absorbed the truth that good wine is made in the vineyard; advancing technologies, improving results both on the vine and in the cellar; and Mother Nature’s mood swings from year to year—One Point Five became a stand-in for what Napa Valley winegrowers and makers en masse have navigated this century, and how they’ve succeeded in a remarkable way.

It seems Doug Shafer’s father persuaded him to come on board as winemaker in 1983, and through the next decade Shafer made both the flagship Hillside Select, from the home ranch, and a “regular” Cabernet. (For the record, Fernandez is not a fan of the nondescript moniker.) Sourcing enough fruit for that latter wine became problematic, though; they didn’t have enough from within the Stags Leap District AVA, so it became a general Napa Valley bottling—regular, if you will (sorry, Elias). As luck would have it, a hayfield near the old Chimney Rock Golf Course, where Shafer and his father had played many rounds, just inside the border of the Stags Leap line, became available. Due diligence turned up a need for an elaborate underground drainage system, close vine spacing, and cover crops, among a litany of other expensive developments for the vineyard dubbed “Borderline.”

Results outstripped expectations, though, and 2004 was the inaugural vintage of … what? The new Shafer all-Stags-Leap wine (or at least enough to meet the legal limit, from a combo of Borderline and the home ranch) needed a name. “There was a sea of Cab in Napa Valley then,” says Shafer. “It was hard to distinguish yourself. We felt like we needed a family image.” They figured since John had started late and Doug had started early, the wine represented just a generation-and-a-half: One Point Five.

See also  The Luxury Resale Market Is Expected to Reach $77 Billion by 2025, a New Report Says

As a snapshot of the valley—and the new vineyard—the 2004 One Point Five is beautiful. A little rich, more than a little perfumed with fruit, and layered with exotic spice and luscious blackberry pie, the wine (aged in about half American and half French oak, not uncommon at the time) reflects what Fernandez describes as a typical warm Napa Valley season. What it doesn’t entirely reflect is the almost wild push through the early aughts on the part of winemakers to let their fruit hang as long as possible during harvest, for the big, lush flavors—and corresponding high alcohol levels—being rewarded by critics and wine lovers of the day. Shafer credits consulting winemaker Tony Soter, well-known for his work at Spottswoode, Viader, Dalla Valle and Araujo, among other noted wineries, for finding the formula—the phenolic ripeness and sugar levels—to make picking decisions that produced a balance just right for this place. And through the wines in front of us, while character varies with the vintage, the alcohol levels are remarkably consistent, and a house balance emerges.

By 2008, the oak on the wine is 100 percent French and entirely new. Fernandez explains that through extensive experimenting with coopers and barrels (a process carried on valley-wide), they discovered that their fruit could handle the full treatment. He shakes his head, though, about the season—“29 straight days of frost! The clusters were small.” By that year too, though, they had learned a great deal about irrigation, specifically, that by judiciously watering before veraison, they could nudge the final berry size smaller. With small clusters and small berries, the wine is concentrated, amazingly fresh and aromatically complicated in the best way, with whiffs of cardamom and damp loam. Fernandez laughs now about their irrigation-research methods, the likes of so-called “pressure bombs” to analyze moisture, antiquated by today’s standards. “Now I have an app for that!” he says, holding up his phone, connected to sensors in the vineyards.

See also  How to Make a Champagne Cocktail, the Celebratory Classic That's Even Better With Prosecco

Then came a one-two punch—2010 and 2011—rendering mythical the notion that California is a sun-drenched wine paradise, where grapes never struggle to ripen. “Cold and tough at the end,” says Fernandez of 2010. “It was hard to get ripe in October.” Shafer decided to drop fruit that year—more than half the crop—just to ripen some of the crop. And with rain threatening, he made the call to pick earlier than they would have liked, one day before the sky let loose with the remnants of a typhoon from the Sea of Japan.

The next year was wet and socked in—“like being in London all summer,” says Fernandez. “It was the first time we ever saw botrytis in Cab.” (Botrytis being the “noble rot” encouraged by damp conditions—to wonderful effect in the world’s great sweet wines, but disastrous in Cabernet.) Enter one of the savviest cellar tools of the decade, the optical sorter. It just so happened that Shafer had added the technological wonder to his arsenal just that year, allowing them to winnow out damaged berries and MOG (Material Other than Grapes) through instantaneous scans and bursts of air. The final wine yield might have been lower, but the quality was better than vintage expectations.

Now, a decade on, the 2010 One Point Five shows the resiny herbs, forest notes, and pepper of the cool vintage, but its dark mulberry fruit is entirely appealing. And the 2011—like many 2011s all over the valley—is showing its longevity, still beautifully fresh, with red and black fruit, great acidity and lovely structure beginning to evolve into a keeper of a Cabernet. Not only did these two wines bust the myth of ripeness here (and put winegrowing and making knowhow to the test), but they’re also now making the case that there’s not one best style in Napa Valley. There are many—and maybe plump ripeness isn’t the gold standard.

Tasting through the years.  Photo: Courtesy of Bryan Gray

Not to be outdone on the climate front, along came 2015—the third year of a severe drought. With little moisture, the crop was small and the berries were small, a formula for intense concentration. “Everybody’s tannins were powerful that year,” says Fernandez. And indeed, the One Point Five is dominated by tannins. At the same time that it’s intense and powerful, though, it’s also balanced and perfumed.

This year, Shafer released its 2018 One Point Five, from a season Fernandez describes as cool but steady. The 2018s I’ve tasted so far from throughout the valley seem poised and balanced, based on individual winemakers’ vineyard and cellar choices rather than co-opted responses to the weather (and, god forbid, fires). This wine is no exception. It’s beautifully concentrated and rich, but it carries herbal notes—mint and forest—for a savory, briary edge to its lush cherry and berry fruit. It’s young, though! Put this one in your cellar (maybe for quite a while).

Describing the 15-year arc of winemaking in Napa Valley through one wine is to paint with broad strokes. When I ask Fernandez what has had the most impact on the quality of Shafer’s wines, his answer is simple: “learning how to farm.” For Shafer, that includes, but isn’t limited to, organics, grasses, irrigation, trellising—and tons of golf balls landing among the vines in Borderline Vineyard. Those changes are echoed around the region—sans golf balls. Doug Shafer tells me that when he first came onboard, his father pushed them all to go to France, to see how the old guard was doing things there. But he and Elias felt like they should stay on the ground right in Stags Leap and figure out what worked best here, on their pieces of land. Whatever it is, it’s working in One Point Five, with site-based character and cellar expertise. And I would argue, in spite of style trends and vintage challenges, Napa Valley vintners have found their way to a range of remarkably defined and delicious wines today.