Every few years the world’s Heads of State, Environment Ministers, and their entourages gather to debate the fate of the planet.

Recently in Scotland at the Cop26 UN Climate Change Conference, global warming was at the top of the agenda—resulting in the recently-announced Glasgow Climate Pact aimed at accelerating the 2030 carbon reduction targets committed to by more than two dozen nations in Paris in 2015.

The problem with conferences, however, is that they often don’t accomplish much in terms of solving real global-scale problems on the ground despite the inspiring soundbites.

All of which begs a far more critical question when it comes to lofty international targets to accomplish common human objectives: How do we actually achieve them?

If this do-good-while-doing-well mantra sounds a bit like an old saw, it is. Sustainability entrepreneurs like Yvon Chouinard (Patagonia) and Doug Thompkins (Northface) were mavericks at leveraging positive, sustainable transformation by slowly bending consumer behavior decades ago.

The difference now is the widespread acceptance that today’s start-ups backed by technology have the potential to address previously intractable global issues in more meaningful, measurable ways than ever before through sheer force of speed, scale, and consumer psychology.

“All of the brands that I’ve built have been for Millennials or younger who believe what they purchase has an impact on the world around them,” says Synnott from his house in Avon, Colorado.

“I grew up in Connecticut in a Wall Street community and I never understood the manufacturing of numbers and what value that created for me, my family, or my neighbors. It never felt real. So my first job out of college was in software, then I worked at Saturday Night Live because I wanted to see how an institution is run, and then I decided to become an entrepreneur. All along that journey, my choice of what to work on has been about the experience: Who am I going to work with? Who am I going to impact? What fundamental change am I making? When I look at building businesses, I want to transform the conversation about the category and prove to larger companies that there is a better way to serve customers and the planet.”

Two decades later when it comes to today’s entrepreneurial landscape, Synnott’s “value” calculus as a brand builder has proven to be spot on.

On any given day, there are approximately 60,00 start-ups in the U.S. clawing themselves into being. Many these days profess to be on a mission to help save the world through what’s now broadly known as socially-impactful, or “conscious”, capitalism. And at scale, says Synnott, all of those companies–and the tens of millions of consumers they transact with–have the potential to move the needles on issues like climate change, soil and water pollution, fair labor practices, and solid waste disposal in major ways.

Synnott’s newest company, Pact which he founded back in 2011, is rooted in that same simple idea which catalyzed his start-up career two decades ago: namely that positive, lasting change begins with the basics.

“I work on what I consider universal products and categories, including cereal, burritos, yogurt, pet food, chocolate and underwear, where consumers have a consistent daily relationship with a product. For most Millennials frozen burritos are a staple in their fridge, they eat the same granola and yogurt every morning, and they wear underwear most days (wink). That ‘habit forming’ creates a fertile space for next generation start-ups to be built around values that make the future better and more sustainable.”

Pact produces a range of apparel basics like underwaer, t-shirts, sweaters, outerwear, linens, and bedding, and when it comes to sustainable transformation, the company’s vision all begins with organic cotton.

Growing cotton the old fashioned way consumes enormous amounts of water to irrigate as well as requires toxic pesticides and fertilizers to farm, both of which are critical environmental issues in developing countries which are increasingly more vulnerable to the effects of climate change on agricultural infrastructure.

“Cotton truly is the fabric of our lives,” Synnott explains. “It breathes, it’s comfy and it’s durable already. And we make all the things that are cotton in your closet already, except that you can now buy them organic for the same cost as Gap or J. Crew. This is possible because we sell directly via our website and also have pioneered a 100% organic supply chain. So we’re not innovating the products we make because we don’t need to reinvent the wheel. We innovate how things are made, where you buy them, how they get to you, and doing it in a better way that matches the next generation’s value set.”

After cotton, Pact takes its focus on sustainability several steps further up and downstream–and in the process is setting a new bar for other apparel start-ups to follow.

When it comes to fulfillment, Pact uses thoughtful packaging including paper envelopes made from 100% post-consumer recycled paperboard and cardboard boxes made with 98% post-consumer recycled materials, both of which are also 100% recyclable to create a closed loop supply chain. A carbon offset shipping partnership also allows customers to shop “net zero” by buying wind energy credits or planting trees to offset their shipment’s climate footprint locally.

This kind of mindful, pay-it-forward capitalism isn’t anything new to Synnott, primarily because it’s not his first rodeo when it comes to socially and environmentally-conscious start-ups.

Synnott’s first company called Bear Naked levered something tens of millions of people do every morning–eat breakfast–and turned fruits, nuts, and granola into a powerful agent for sustainable change through better sourcing and cleaner ingredients. He sold that company to Kellogg’s back in 2007.

Shortly after that–and following a two-month stint as a contestant on the hit reality TV show “Survivor”–Synnott founded Evol in 2009 which specializes in frozen burritos made from healthy, organic, and free-range ingredients with the goal of transforming “the broken food system”. Four years later, Synnott merged Evol with Boulder Brands and it’s now one of the largest healthy, frozen food companies in the country.

Next up was healthy pet food in the form of I And Love And You. Synnott founded that company in 2011 focusing on dog and cat food produced from real meat and natural grains without fillers years before PetSmart started packing their aisles with competitors who followed Synnott’s lead and eventually helped to create the healthy pet food craze.

It doesn’t take a seasoned venture capitalist to see the patterns that have led to Synnott’s replicable track record of success.

“Anything that I am doing for the first time I consider to be a startup. You survive or die,” he says on the art and mindset of being a serial entrepreneur. “I love the adventure of building something from scratch that is going to be meaningful for generations to come. I think the world’s largest challenges can be partly solved by entrepreneurial ventures that connect consumers to a better way of doing things in their lives. Ultimately consumption is the driver for trashing the planet. We, as consumers, can still be selfish but do it in a way that is a little less toxic.”

When it comes to entrepreneurship’s school of hard knocks, Synnott has as much to teach the next generation of start-up founders as he does on sustainability and paying it forward.

On strategy, he says, “Play a game that you know you can win, and if you can’t find that game, invent it. I’m always trying to create a new category, distribution method, or brand proposition that gives us a space to own.”

On team, it’s culture that matters most above all else he emphasizes. “There are hundreds of VPs of Finance who you can hire. But how that person fits into your culture is what matters most. Teammates need to make failure feel like an opportunity, the routine feel fun, and learning new things feel collaborative. In start-ups, very few people on the planet have experience doing their exact job at their exact stage of growth. Everyone is kind of doing it for the first time. For me, I want teammates that have my back, are comfortable with failure, and ultimately who you want to be in the boat with when shit goes wrong. Because it will.”

On raising capital and keeping control, try not to get drunk on either of them. “Every entrepreneur will make decisions that they will regret in the morning and ultimately that can make you feel weaker as a leader. Try to fight not using a crutch, even if it’s painful for periods. Your ability to keep ownership in your business is the equivalent to your tolerance for pain. Which means don’t run out of money because you will have no leverage and will lose most of the value you’ve created.”

Lastly on building a brand that evokes loyalty and trust when it comes to sustainability, “It starts with making a product that people want. The product has to deliver and the customer experience has to be easy. If they can’t see themselves in the product and get it quickly and easily, then the consumer won’t go to the next step of understanding how the product is made. So you need to build desire first, then they will listen to how and why you make the product the way that you do. Once they are ready to listen, the message has to be both clear and consistent and build into consumable digital moments. ‘Want to save water? Did you know organic cotton uses over 80% less water than conventional cotton?’ Our goal is to resonate with our customers so that they understand the value of our mission as much as our products.”

As for Pact’s clothing, linens, and bedding, they are everything Synnott envisioned them to be when he first founded the company a decade ago: habit forming. They feel good on, and make you feel even better knowing that simple things like underwear and T-shirts really can help save the planet. 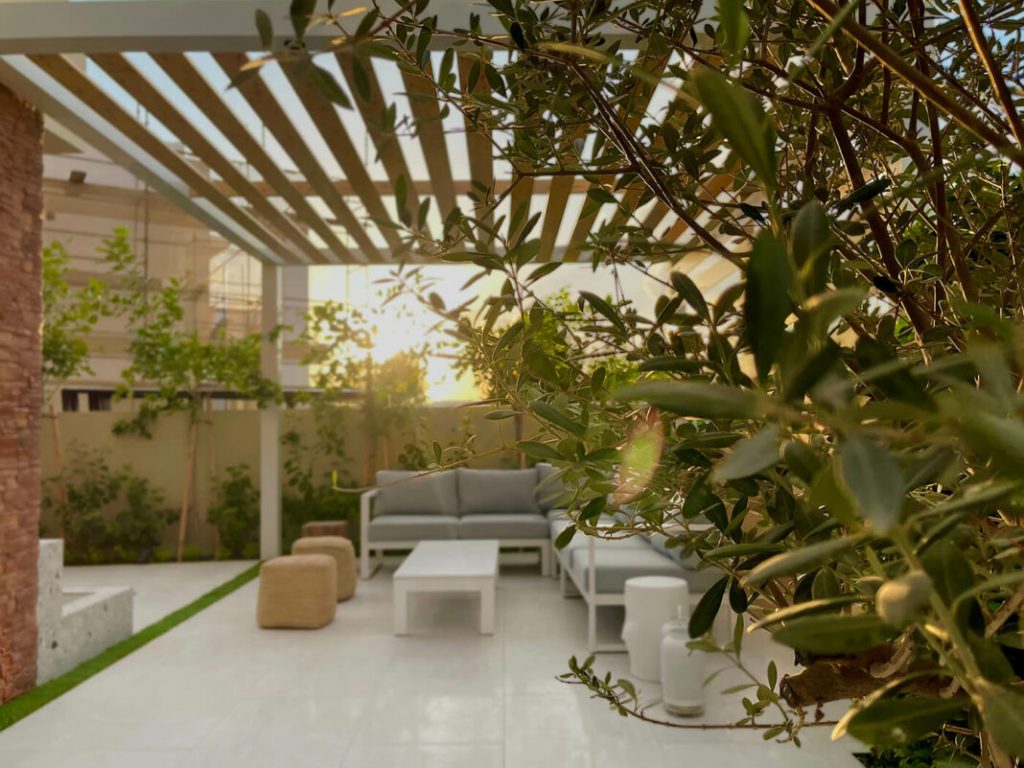